Taking a taxi in Kampala. 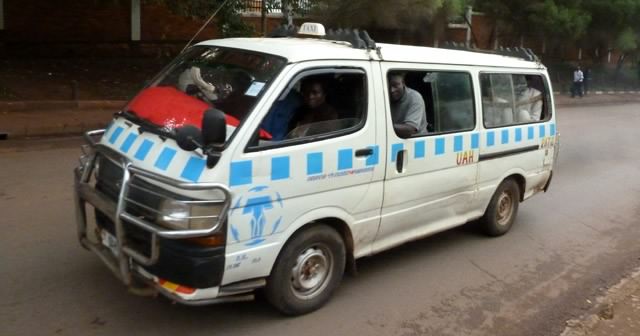 My heart broke for her as she plead for change from the conductor, who continued to bang the door, yelling for her to get out. He hurled all kinds of vulgarities and all but carried her out. She had a crying baby on her hip and luggage that fit both her hands.  The other passengers asked for him to be considerate and give her what was hers, with one going as far as threatening violence. He did not relent. Lots of insults later, she walked away, cheated and embarrassed. But what could she do?  We all decided to get out of this taxi in solidarity. We would give our money to somebody with a little less impudence. But it being the Northern bypass at 11:00 PM on a Saturday night, we chose safety and comfort over valor. She began her walk back to where her stop was, where the taxi driver should have stopped earlier. Something he could have done if there had been a would-be passenger.

With more than half of the Ugandan population in the city using taxis, their impunity is something that ought to be given some attention. They are the primary mode of transportation with stops at every corner. They are affordable, readily available and convenient.  They ought to be a good thing. But the people in charge of them, the drivers, conductors, stage handlers and touts have made boarding one nightmare.

From the reckless driving, to the blatant disregard for traffic rules and regulations, the incessant hooting, horrific language and disrespect for their customers, it is a miracle people get to their destinations in one piece. Considering almost all of them are in a very sorry state, their primary objective is to make money as they dodge the traffic police in any way possible, safe delivery to passengers from point A to B is merely a means to an end. But just like boda-bodas in the city, they are a necessary evil.

Like with all the fellow passengers that are treated with this much animosity, I sympathized with her and hoped that I would see the day the men who are in charge of our travel behave in a more humane way. But until then, I will stick to having loose change at all times.

Hello, :-) My name is Shanine and I love to write. Thank you for visiting my blog. I write about what I see, what I think and what I would like to see. Kindly engage and let me hear your thoughts in the comments section. Twitter: @sha9ne Facebook: Chernene Ahimbisibwe.